Across the more than two centuries that witnessed its glory, from Italy to England and at last France, the Viol has changed not only in shapes, but also in features, building techniques, wood choices, decorations, making it very difficult to identify a “standard model” or a reference sample. Each one of these factors contribute to render each model a real unicum, the sample of a tool at the service of a precise sound aesthetic clearly belonging to an historical period and a precise location.

One of the most important building aspects that changed across the times and the territories in which the viol flourished has been the construction of the arched soundboard, the key of the sound.

Analyzing the survived original instruments held in museums, emerge than, rather than the system we know today of carving the solid spruce until obtaining the needed curves, originally Viols were equipped with bent soundboards, a method that allows less wood waste and assures a stiffer plate, having less wood fibers interrupted by the cut of the chisel to carve the shapes.

It is said that the first examples of arched tops, though only with transversal curves, introduced to strengthen the plate over the weight of the string tension on the bridge, were curved forcefully, glueing a graduated spruce plate over the variating height of the ribs and on radius bracings, as it is frequent on guitars.

This technique was adopted in the beginning of the 16th century in the Venetian area, and can be found in survived originals by Francesco Linarolo, founder of a dynasty of luthiers.

Many thanks to master Viol maker Richard Jones who allowed me to use his photographs to explain this technique. 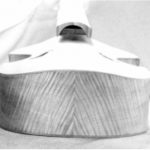 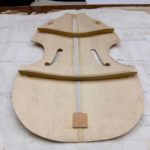 Later in the 16th century some luthiers developed a new and more refined way of bending wood plates, capable to guarantee a more complex and effective arching system, with curves both longitudinal and transversal.The tops were carved using a set of wooden wedges, to spread (and thus bend) two symmetrical plates secured together by wooden clamps placed over the perimeter.

Examples of this technique can be found in Italian viols of the Venetian area but also, later, in center European instruments, such as the one made by Tielke or in Dutch Viols. 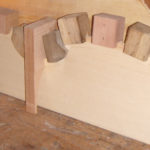 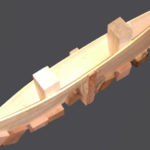 In England, probably due to the lack of the spruce wood, which had to be imported from other European countries, the luthiers developed a different way to obtain arched tops, using a set of bent staves (usually 5), in a manner that was probably inspired by the construction of the barrels, and allowing the use of slightly smaller pieces of wood.

This technique was used since John Rose, until later makers such as Barak Norman, becoming a characteristic trait of the English sound, and was lately imported in France, where luthiers of the late 17th century begun to build Viols starting from English originals that were very fashionable amongst French nobles. 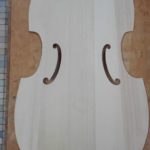 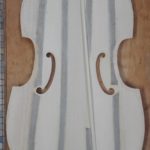